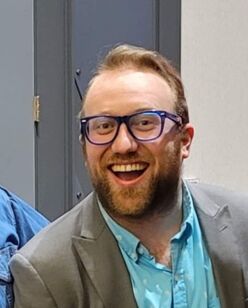 Nathan Rødahl is a highly regarded pedagogue and educator in the northwest region.  He is known for his work with the historic Port Angeles High School Orchestra and his work on the National Council for Orchestra Curriculum and Pedagogy in addition to conducting engagements with Ensign Symphony and numerous guest opportunities.

As a clinician and lecturer, Nathan is one of the foremost authorities on contemporary practice habits and promoting the adoption of underrepresented composers and methods. Nathan is a published composer and arranger, and has been recognized for his achievements in both conducting and flexible arrangements of standard repertoire.

Nathan holds degrees in education and conducting from Pacific Lutheran University, and has studied graduate level conducting at the University of Oregon in addition to countless masterclass opportunities around the country. ​

Justine Jeanotte received her Bachelor of Music degree in Violin Performance from Pacific Lutheran University. She was born in Alkmaar, The Netherlands, where she began her violin studies at the age of eight.

In addition to taking on this new role of conducting the Debut Orchestra, she teaches the strings classes at the Madrona School, and has had a private teaching studio since 1998. Past teaching positions have included orchestra director at West Sound Academy.

She has played with the Tacoma Youth Symphony, Tacoma Symphony, Kitsap Opera, Peninsula Ballet Orchestra, Bainbridge Symphony Orchestra, and the Olympic Serenade Quartet. Although classically trained, she has also played, recorded, and toured both nationally and internationally with the bands "Paundy" and "Before Cars."
​